Fishomania returned to Hayfield Lakes in Doncaster at the weekend. It’s a venue that was used for the live televised final until the move to Cudmore in 2008.

In fact, there were eleven finals there, dating back to 1997 when the £25,000 first prize was won by Kevin Rowles.

The beauty of this competition is that it now has some terrific history. It was lovely to see former champions like Steve Cooke, Steve Jackson and Matt Hall reminiscing about their triumphs at this venue. One of the reasons the final left Hayfield was that it simply became too peggy (I’m telling you this from what others have told me…I’d never been there before Saturday’s qualifier!).

When fish shoal up around one area, it makes for a very tough match for those who are elsewhere.

First impressions of a fishery are always interesting. I thought it looked terrific. A nice outlook, with a pub at the top (always a bonus!!). There are three main lakes. Big Adams, Little Adams and Island. The two ‘Adams’ lakes are surrounded by willow trees. Island has – well, a big island! There’s clearly been a lot of work carried out lately, with banks being re-graded and levelled out. There’s an access road all the way round too, which helps match anglers to carry the masses of kit they take to their pegs.

Saturday’s match was a peggy one – not helped by a really cold easterly wind. The carp seemed to be hiding being the island on the big lake – and David Burley and Marc Jones were both on them! 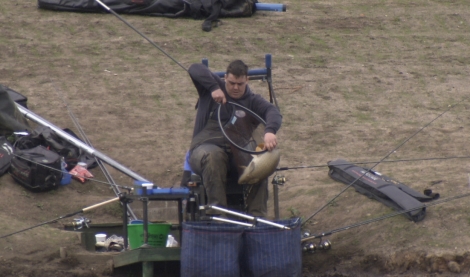 There were three ‘ton plus’ weights, but probably because of a combination of the weather and angling pressure, some of the back-up weights were poor. There were a few blanks, a lot of early departures and one of the sections was won with just 9lbs!

The full story of the match will be in this Friday’s show, which will be on Sky Sports 3 this week at 7.30pm.

For anyone who missed last week’s show, here’s a link to our film about Qualifiers 2&3.

I’ll be off to Gold Valley Lakes this Wednesday for the fifth match in the series. It’s the closest one to home – which will be a welcome relief. I’ve already put about 3,000 miles on the car covering the first 4!!!

Hope you enjoy the film.